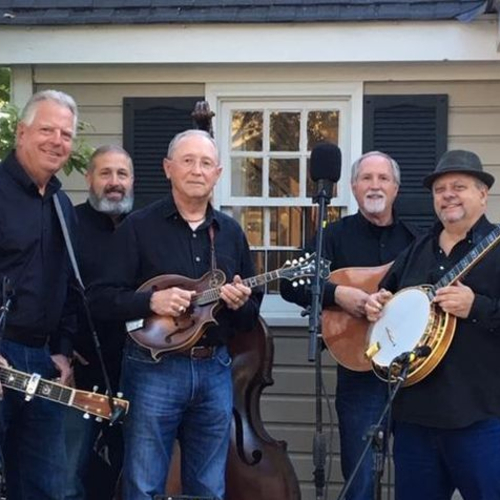 Tickets for this event are not available.

Chuck Schutte began playing Rock and Roll music around 12 years old also playing Trumpet for many years. He was lucky enough , with his Rock and Roll band to win several Talent shows which ended with meeting and playing on stage with Arthur Smith back in the 60's.  Back in the early 70's he was invited to go to a bluegrass festival where he saw and heard the Seldom Scene for the first time and was hooked.     After seeing and hearing Jerry Douglas on stage, Chuck fell in love with the Resonator Guitar and began learning the guitar practicing for hours a day.

Doug McDonald is a native of Sampson County , NC where he currently resides just outside of Dunn. He started playing bluegrass at the age of 7 when he picked up the guitar and by the age of 12 a banjo found its way into his hands. In the late 70’s he and his brothers formed a bluegrass group called the McDonald Brothers. In the 90's he and his brother formed a group called Steel Creek where he played banjo and sang lead and tenor and started writing songs. A little later in life he picked up the mandolin and played with several groups out of Virginia .

Wright Young was raised on a Country Farm loving Country Music. Each week he looked forward to listening to The Grand Old Opry on Saturday night radio and going to Grandpa and Grandma's house to just look at and hold Grandma's Silvertone guitar and Grandpa's fiddle.His high school & college years included eight years of piano (for mama) and numerous guitars for himself. .His early working career introduced him to a Bluegrass Banjo picker with whom he attended his first Bluegrass Music Festival and fell in love with the music and the Mandolin..

Greg's varied musical background is evident in his creative style on the bass. Greg also brings tenor and baritone vocals and leads the front line on stage. With his gift for vocal and musical arrangement, he invents some of those unique sounds we strive for. Greg and Annette live in Apex NC, with sons Cameron and Nicholas.

Online ticket sales for this event have ended. Please contact the Box Office for more information.